It has been some time since discussions commenced regarding the imposition of a rate cap on local government in Victoria. There have been a few earlier posts on the topic (see here, here, here, here and here). The rate cap has now been set and the process for any council seeking an exemption from the rate cap has been communicated. The Essential Services Commission has been effectively positioned as a regulator for local government. So what have councils been doing?

I would say not much. The requirement that the community support must be demonstrated if seeking an exemption, coupled with 2016 being an election year, has stifled activity across the sector. According to The Age newspaper 21 councils have indicated they may apply for an exemption. Some councils, including Melbourne City Council, have attempted to demonstrate community support for their rating strategy, which could support an application for an exemption from the cap.

The results from the few people’s panels held have been interesting but not unexpected. The community expects the council to use current resources well before asking for more. They want to see value for money before they will support asking people to pay more tax. Fair enough.

One colleague explained to me how their organisation is thinking about a potential application for an exemption.   It highlighted the lack of attention given to what the community says. They are looking at the projected growth in expenses and revenues in the next 10 years and the gap between them. I have attempted to show this below. 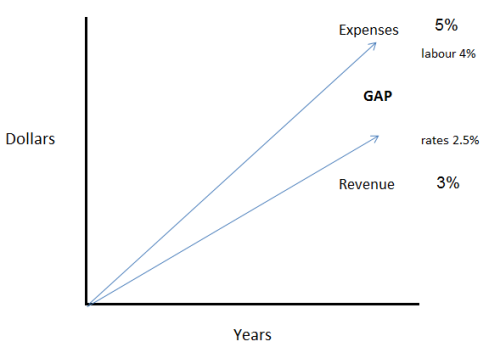 The gap is critical because it directly impacts on the ability to fund capital works to renew infrastructure or provide new or additional infrastructure to meet community needs. Most councils have expenditure growth of 5-6% made up mainly of labour cost increases, increasing depreciation and other increasing costs of doing business (e.g. utilities, fuel, materials, contractors).

At the same time revenue growth is around 3% made up mainly of rates (capped at 2.5% by the State government), grants and increased user fees (e.g. permits, facility entry charges, parking fines).

Making a case for an exemption from the rate cap based on infrastructure capital requirements is effectively saying that the only way the growing gap between growth in expenses and revenue can be addressed is to increase revenue through rates. It assumes that there is no room to significantly increase other revenues (i.e. grants from other levels of government, user charges, asset sales, private investment in public infrastructure) or to reduce the rate of growth of expenditures. This is the assumption that I think needs to be challenged, especially given the feedback from community panels.

Are councils doing all they can to use existing resources effectively and efficiently? In particular, are they working on labour productivity to get better value from the most significant and fastest growing area of cost. If I was the ESC, I would look at the above diagram and ask what is being done to reduce the rate of labour cost increase and get maximum benefit from the expenditure.

Alternatively, have councils looked at other ways of delivering services that have lower labour costs. Typically this has happened through Local Government Trading Enterprises or outsourcing. Let’s face it, councils have failed to arrest the rate of wages growth (it has consistently been above the cost of living (CPI) increases in Victoria) and typically they have not gained much for it (i.e. few concessions from staff and unions for labour productivity or service delivery improvements).

I don’t know of a council that has a planned approach to improving labour productivity. I don’t know of any that has approached the periodic Enterprise Bargaining processes with a clear, definite and articulated idea of how they want to use labour to deliver services in more efficient ways, and how that should affect wage increases and working conditions. In fact, I don’t know of a council that would know how to increase labour productivity, other than to buy less of it (i.e. stop filling vacant positions or make staff redundant through cost cutting) and then expect the same services to be delivered to the same quality.

Surprisingly, this last approach sometimes works when staff are well organised and dedicated. They pick up the work of departed colleagues and make sure services are delivered as well as they can. Management’s inept ‘labour productivity’ approach yields a return. More often though, work doesn’t get done. Often this work is invisible; therefore, no one complains and draws attention to the impacts. For example, cuts to maintenance budgets often take a decade to show up and then it is hidden in the premature replacement of expensive infrastructure.

The problem that no one wants to talk about in local government, and it makes some members of this State government uncomfortable as they deliver on their election promise, is that in providing additional services, often as a result of State government cost shifting, councils have allowed unplanned growth in staff and resultant labour costs. There has been no systematic and sustained effort to manage labour in a way that delivers the best value to the community paying for it. If you ask people working in the sector, they know where there are inefficiencies and waste, or where over servicing happens, and they acknowledge that the culture of local government is not focussed on high performance.

It has really just been too hard to change it.