The subtitle of this book says it all – ‘A Practical Guide to Solving Complex Problems, Avoiding Unintended Consequences, and Achieving Lasting Results’.   Every so often you pick up a book and it provides answers to problems that you and thousands of others grapple with every day. This is one of those books.   David Stroh co-founded ‘Innovation Associates’ with Peter Senge, who later wrote the management classic ‘The Fifth Discipline’. Both are proponents of systems thinking. The premise of this book is that ‘applying systems thinking principles and tools enables you to achieve better results with fewer resources in more lasting ways’. Wow.

Stroh uses detailed, real-world examples to make his case. His ‘systems stories’ explain how people can improve performance by shifting from just trying to optimise their part of the system, to improving the relationships between all parts of the system.   The systems stories start with seeing the big picture.

It is often the case in local government that people focus mainly on their functional responsibilities and either fail to see connections to the work of others, or they are not interested. Life is simpler when achievable goals can be set and complexity is overlooked. Putting the effort in to understanding the whole system is seldom rewarded. Local government is epitomised by sayings like ‘keep it simple’, ‘look for quick wins’, and ‘pick the low hanging fruit’.

In contrast, Stroh uses the ancient Indian story of the blind men and the elephant to illustrate the importance of the big picture. In the story each man touches a part of the elephant and assumes that they are experiencing the whole. Each of them is right because they touched a different part of the elephant. It takes cooperation for them to realise that the elephant is actually made up of all of the features that each of them has described. 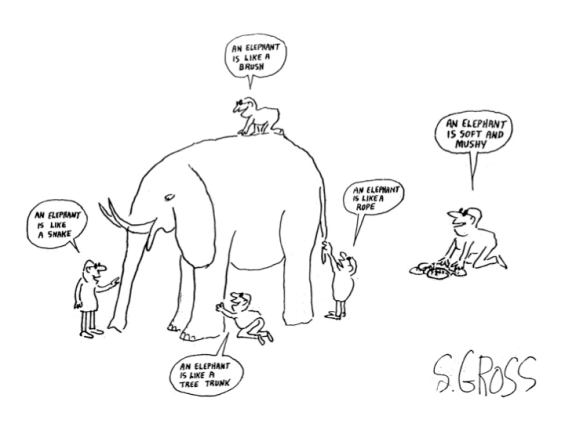 The blind men and the elephant

Stroh extends the story to explain that when people only see part of a complex whole, they tend to see reality in terms of what they do well, and could do better with more resources. They can also fail to appreciate and question the value of contributions made by others. They cannot see how their ‘intentions, thinking and actions interact with those of other stakeholders’.

Stroh also uses one of my favourite tools – the iceberg metaphor. The iceberg shows the difference between symptoms and root causes using three levels of insight.

It is the system structure that holds the solution to chronic, complex problems. It is here that root causes lie in the ‘many circular, interdependent, and sometimes time-delayed relationships among its parts’. Stroh says there may be easily observable elements – e.g. policies – and less obvious factors, such as ‘perceptions and purposes’. He says that it is here that the attractors, which ‘shape and stabilise a system’s behaviour around a limited number of possible states’, can be found.

Stroh ‘deciphers the plots’ of systems stories to explain to the reader how systems work. He looks at the various ways that failure occurs. He then provides a ‘four-stage change process’ using creative tension, as described by Peter Senge in ‘The Fifth Discipline’. The energy for change comes from making explicit the difference between what people want (aspirations and goals) and what they are (the current reality).

The four stages are explained in detail by Stroh as a process where stakeholders:

Stroh provides an explanation of each stage. The advice is detailed and filled with useful examples and case studies. At times it reads like a recipe book, with tasks identified and discussed in the order on deployment. Lots of tools are described.

I was particularly interested in the section on ‘high-leverage interventions’. I like to think of these as the system thinkers’ equivalent of ‘low hanging fruit’. Whilst not so easy to reach, they are worth the effort. Stroh lists four key leverage points:

Each is explained in detail. A part that I related to described three ‘rewiring options’ that I could see overcoming the local government focus on the here and now, short term success, and that fruit that is easy to reach. Stroh says that organisations should:

If you have read this far and you are starting to realise that you are not naturally a systems thinker, Stroh finishes his book with a chapter on ‘becoming a systems thinker’. It is not too late.

‘Since we are a part of the system we seek to understand and influence, we need to cultivate a certain way of being and also learn new ways of doing things’

This book provides a practical approach to using systems thinking to solve the intractable problems that are present at every council.

Read it and have a go.